Skip to main content
Our right to knowledge: UNDP report recognizes EIFL role
UNDP report: partnership between domestic organizations and EIFL contributed to ratification of the Marrakesh Treaty in Mongolia 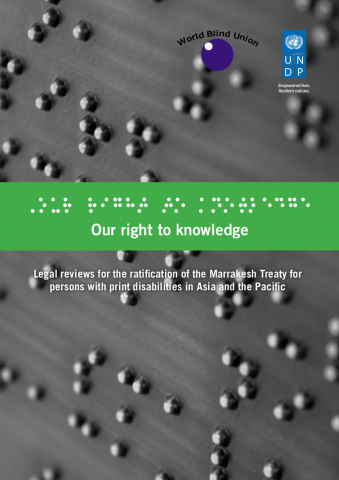 A recent report by the United Nations Development Programme (UNDP) and the World Blind Union – Asia Pacific (WBUAP) recognizes the contribution of domestic organizations and international partners, such as EIFL, in advancing efforts towards ratification of the Marrakesh Treaty for persons with print disabilities.

This is a key finding in a case study on Mongolia, that ratified the treaty in 2015, one of three countries featured in the report where ratification is complete or advanced (the others are India, that ratified in 2014, and Thailand that has introduced national legislation).

The report also contains a glossary of terms, a model statute for implementation of the treaty, and an appendix that sets out provisions in human rights treaties, such as the UN Convention on the Rights of Persons with Disabilities, that rely on the right to knowledge or information.

“This report offers a clear rationale and practical legal guidance to realize the principle of ‘leaving no one behind’, a key feature of the newly adopted Sustainable Development Goals (SDGs),” said Nadia Rasheed, Team Leader, HIV, Health and Development, UNDP Bangkok Regional Hub. “Ratifying and implementing the Marrakesh Treaty are about realizing the fundamental rights of one of the most marginalized populations, reducing poverty, and eliminating exclusion to achieve inclusive development, which underpins UNDP’ s core development vision.”

"EIFL is strongly committed to speedy ratification of the Marrakesh Treaty that creates an opportunity for libraries to vastly improve services to people with print disabilities, thereby improving lives and increasing life-chances," said Rima Kupryte, EIFL Director. "EIFL welcomes the UNDP report that provides authoritative guidance on the key features of the treaty, and practical advice on implementation into national law for countries in the Asia-Pacific region and beyond."

EIFL supported negotiations over five years at the World Intellectual Property Organization (WIPO), and participated in the Diplomatic Conference that led to the adoption in 2013 of the Marrakesh Treaty for the benefit of persons who are blind, visually impaired or otherwise print disabled.

Libraries are essential to the success of the treaty because libraries in every country have a long history serving people with print disabilities, and are one of the primary sources of accessible reading material for education, work and leisure purposes. In addition, only blind people's organizations, libraries and other so-called 'authorized entities' can send accessible format copies to other countries.

'The Marrakesh Treaty: an EIFL Guide for Libraries' is a straightforward introduction to the treaty, its key provisions, and the role of libraries in contributing to the treaty’s objectives. It also contains recommendations for implementation in support of public interest goals of enabling access to knowledge. The guide is available online in English, French, Russian and Serbian.

EIFL supports ratification of the Marrakesh Treaty in partner countries, including in Nepal, Kyrgyzstan and Sénégal.

Read how EIFL worked with local partners in Mongolia to advocate for the treaty that was ratified by the government of Mongolia on 23 September 2015. Mongolia was the tenth country to ratify the treaty, reaching the halfway point towards its entry into force.