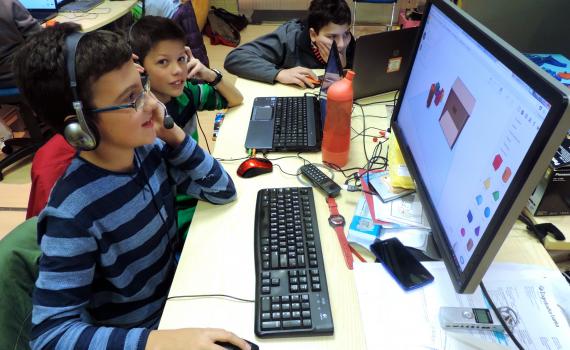 Rijeka was once one of Croatia’s most productive industrial centres, but over the past 25 years, factories have closed and the economy has shifted to imports. Librarians were concerned that young people were being raised as consumers, and were losing the spirit of invention. Also, limited availability of technology at schools meant that children were not learning the digital skills needed to become ‘makers’ in the 21st century.

This situation prompted librarians to develop the 3D Printing Incubator for Children and Youth pilot project, which they launched with a small grant (up to US$20,000) from the EIFL Public Library Innovation Programme (EIFL-PLIP).

Librarians created a lively ‘maker space’ (community space where people gather to learn and work on creative projects) in the library. They equipped the library with laptop computers loaded with 3D design software, 3D printers and a 3D scanner for their 3D printing workshops, and Raspberry Pi mini-computers to teach young people to write computer programmes for computer games and other applications.

The next step was to teach 10 librarians how to use the equipment, and how to facilitate 3D workshops with children and youth. The library also recruited volunteers from University of Rijeka to mentor the children.  Librarians then began a major awareness raising campaign, reaching out to children and youth through schools and technical colleges, and to adults through city-wide 3D demonstrations.

Very soon, over 100 keen and curious young people signed up for classes, and the library's 3D Printing Incubator for Children and Youth was ready to start.

The pilot project was a huge success. In just 18 months, the library -

The project transformed the library into Rijeka’s premier ‘maker space’ for children and young adults, and stimulated their creativity and confidence in using digital tools to bring their ideas to life. It also changed public perceptions of the library: librarians report that the library now recognized as a leader in creativity and technology education in Rijeka.

The library serves the seaport of Rijeka, attracting an average of 1,000 users per day and offering services that contribute to development of their community. Services include provision of print and e-resources, digital and media skills training, book clubs for all ages, and GKR Magazin.

It is extremely important to give young people the opportunity to grow using new and sophisticated technology, and to prepare them for the digital future. The library is an important, innovative influence in our community.
Vojko Obersnel, Mayor of Rijeka
Public Library Innovation Programme
Croatia