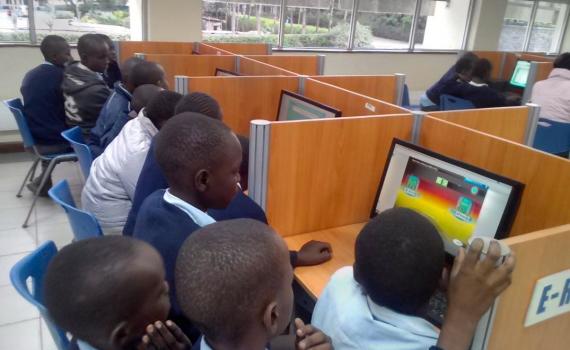 Maths ‘champions: children run to the library after school to practise their maths using the Maths-Whzz programme.

During visits to primary schools, librarians from Nakuru Public Library in the busy town of Nakuru in mid-western Kenya were alarmed to find that most of the children they spoke to hated mathematics. The children believed maths was very difficult, many were failing, and some dreaded the subject so much that they wanted to drop out of school.

The librarians put their heads together: how could they help change children’s attitudes and boost their performance in mathematics?

In 2016, at a national meeting of directors and managers of Kenya National Service Libraries (KNLS) libraries, Mrs Purity Kavuri-Mukutu, head of Nakuru Public Library, heard a presentation about the e-learning programme Maths-Whizz. The presenter, a representative of the international learning platform, Book Waves, which distributes educational material aligned with the Kenyan school curriculum, explained how Maths-Whizz uses animations, games and worksheets to stimulate children’s interest in maths and build their maths skills.

It seemed like a perfect fit. Back in Nakuru, Purity called a meeting of local government officials, headmasters, maths teachers and parents to discuss a project involving Maths-Whizz. Because primary schools in Nakuru (as in many other parts of Kenya) do not yet have computers for students to use, the meeting decided that classes should take place in the library, which has 30 public access computers and broadband internet.

In May 2016 the library was awarded a small matching funds grant from the EIFL Public Library innovation Programme (EIFL-PLIP) to pilot maths classes in the library. The librarians acquired and set up Maths-Whizz on the library’s computers; selected six schools and developed a schedule of maths classes. Each school would come to the library twice a week for an hour-long Maths-Whizz class, accompanied by a maths teacher.

The County Government gave the schools permission to bring the children to the library, and the Maths-Whizz project could go ahead.

"I have conquered one of the greatest enemies in my life. I always believed that maths was one of the most difficult and complicated subjects. However after learning maths through the digital learning programme at the library, my grades have miraculously improved - from 30% to 84%. I have now become the class ‘small maths teacher’ I am now able to help my classmates and siblings at home. I have also learnt how to use a computer. My parents can’t hide their joy and this made them buy me a new dress." - Grace Gakenia, Class 6, Lakeview Primary School.

Through the Maths-Whizz project, the library -

KNLS Nakuru Public Library’s maths classes are continuing and expanding. After learning about the success of the classes, five more schools signed up, bringing the number of schools the library is working with to 11.

The project has won support from across the community - from students who run to the library after school to practise their maths; from parents who now regularly bring their children to the library; from teachers who say that they have also learnt from the programme and that it has improved their classroom practice; and from the Nakuru County Education Office.

The KNLS Board has agreed to continue to support the Maths-Whizz classes as an ongoing service of Nakuru Public Library, and is also supporting Maths-Whizz projects in three more KNLS branches: Buruburu, Kibera and Narok.

Learning is for enjoyment. I talked to one girl and she told me that she now enjoys learning mathematics. The most beautiful thing for a parent is to know that a child is enjoying learning. The library has become one of the best places to be because the children can access Maths-Whizz digital learning.
Millicent Yugi, Nakuru County Education Director
Public Library Innovation Programme
Kenya