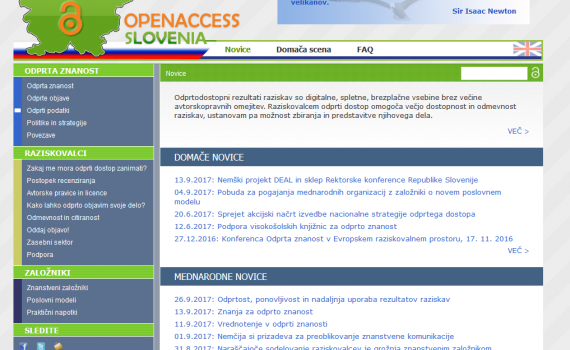 Until 2011 information on open access (OA) in Slovenia was scattered. Individual OA enthusiasts and supporters were promoting OA and sharing information with academic and research communities, but their efforts were not coordinated.

In February 2011, representatives of Slovenian universities, research institutions and libraries met to discuss how to promote OA in Slovenia in a more organized way. The meeting decided by consensus that a web-portal would be the most effective tool for deepening understanding about the benefits of OA, and how OA could improve visibility of Slovenian research.

This work became more urgent in April 2011 when the Slovenian Government approved the Research Infrastructure Development Plan 2011-2020. The plan sets out Slovenia's priorities for development of international and national research support infrastructure and participation in large-scale European projects. Among the listed priorities is incorporation of OA in national infrastructure for depositing data and publications from publicly-funded research.

With a small grant from EIFL, a consortium of 13 Slovenian universities, research institutions and research libraries launched an OA awareness-raising and advocacy campaign. The main engine for the campaign was to be a national web-portal to share knowledge about OA, in Slovenian.

FIND OUT MORE ABOUT OA IN SLOVENIA