Skip to main content
The Right to Read in Belarus

Libraries in Belarus can benefit from the Marrakesh Treaty 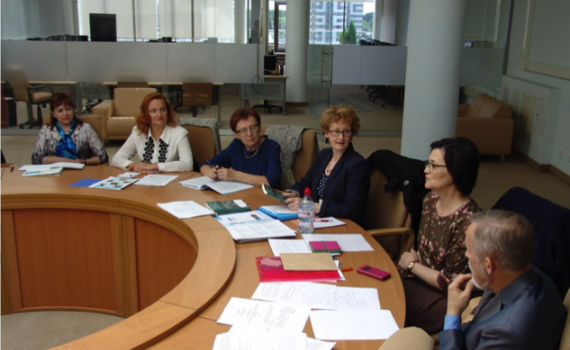 The 2017 meeting in the National Library of Belarus to discuss the benefits of the Marrakesh Treaty. EIFL took part in the meeting.

EIFL has been engaged in copyright work in Belarus since 2006.

In cooperation with our partner, the Council of Belarusian Libraries on Information Cooperation (BelCoLib), EIFL has provided copyright training and supported the adoption of library and disability-friendly provisions in the copyright law.

Since 2016, we have focused on encouraging adoption of the Marrakesh Treaty for persons with print disabilities in Belarus to help fulfill the promise of the right to read for people who are visually impaired or are other print disabled.

The Marrakesh Treaty (official name: Marrakesh Treaty to Facilitate Access to Published Works for Persons Who Are Blind, Visually Impaired, or Otherwise Print Disabled) improves access to knowledge for print-disabled people by giving organizations like libraries the right to reproduce printed works in accessible formats such as braille, audio, large print and digital formats, and to exchange these works across national borders. The treaty was adopted in 2013 by member states of the World Intellectual Property Organization (WIPO), and it entered into force globally in 2016.

As a result of our contributions raising awareness and consulting with policy makers and librarians, Belarus amended its copyright law in May 2020 to bring the law into line with the Marrakesh Treaty, and it did so in a way that mostly maximizes the benefits of the treaty for libraries and persons with print disabilities. In July 2020, the government deposited its instrument of accession at WIPO. The Marrakesh Treaty entered into force in Belarus on 22 October 2020.

Now libraries can start using the treaty, and can send and receive accessible format materials from other Marrakesh countries.  A ‘Getting Started’ guide adapted for Belarusian law, published by EIFL and partners, aims to assist libraries in Belarus in the practical implementation of the treaty.