Skip to main content
The Right to Read in Mongolia

Mongolia becomes the 10th country to ratify the Marrakesh Treaty 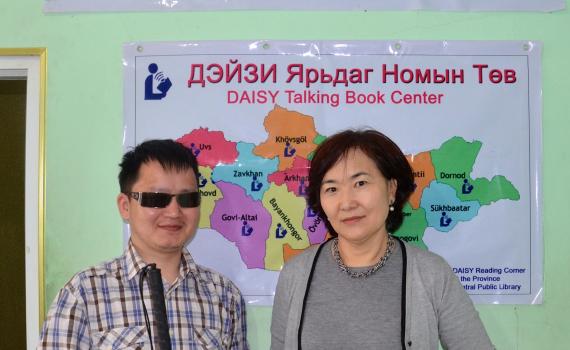 To fulfill the promise of the right to read for blind, visually impaired and other print disabled people, EIFL is supporting ratification of the Marrakesh Treaty for persons with print disabilities in partner countries, and its implementation into national copyright law.

As a result, Mongolia became the 10th country to ratify the Marrakesh Treaty on 23 September 2015. Mongolia’s ratification marks the halfway point towards entry into force of the global copyright treaty, and a significant step forward in improving the lives of people with print disabilities.

Access to learning and information is extremely limited for Mongolia’s 16,500 blind and visually impaired people. Most are unemployed and live in poverty. A 2011 survey by the Mongolian National Federation of the Blind (MNFB) found that only 16% of its members had completed primary or secondary education, and just 1% had graduated from university.

A major contributing factor to unemployment and poor education among blind and visually impaired people is lack of access to books and other learning materials in accessible formats such as Braille, audio and large print, and digital formats.

National context – the timing was right 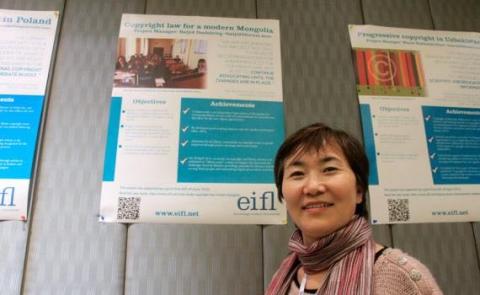 With support from EIFL’s Public Library Innovation Programme (EIFL-PLIP) in 2010/11, Ulaanbaatar Public Library (UPL) and the Mongolian National Federation of the Blind (MNFB) built two recording studios to create talking books in digital DAISY format. As a result, around 770 Braille and audio-books are now available, opening up new worlds of learning for people with vision impairments.

Following the success of the UPL DAISY Talking Books service, the Social Welfare law was amended in 2012 so that all blind and visually impaired people in Mongolia have the legal right to be issued with a free DAISY talking book player.

In order to realize the opportunity for equal access to information, more content in accessible formats was required. But a major challenge was getting the permissions needed to create accessible format copies, for example, to digitize textbooks for blind children.

“Publishers, who own all the rights, do not permit the DAISY Centre and MNFB to convert the textbooks”, said M. Tsengel, DAISY Expert at Ulaanbaatar Public Library (UPL). “So blind children learning at school have no modern books, and rely instead on ancient Braille textbooks printed in Russia during the socialist period. We need to be allowed to access DAISY content from organizations in other countries. We have raised the hopes of blind people in Mongolia to read books, copyright law can’t let them down.”

In order to remove the copyright barriers, the Mongolian Libraries Consortium (MLC) decided in 2014 to advocate for early adoption of the Marrakesh Treaty, and, with support from the EIFL Copyright and Libraries Programme, took the lead in organizing a campaign for ratification of the treaty in Mongolia.

“I am so proud that Mongolia supports the adoption of an international legal standard to ensure that blind people have the right to read, a basic human right that librarians know is so important for education, employment and personal development. I’m delighted that the hard work of MLC and the campaign team has paid off. We are very grateful to EIFL for their support, without which this work would not have been possible". Baljid Dashdeleg, EIFL Copyright Coordinator, Mongolian Libraries Consortium.

Now the Marrakesh Treaty should be implemented into national copyright law e.g. to allow cross-border exchange of accessible format copies.

"Libraries and blind people’s organizations are natural partners when it comes to providing information and reading materials to people who are blind and visually impaired. WBU values its work with EIFL to ensure that the Marrakesh Treaty enters into force as soon as possible." Maryanne Diamond, Chair, WBU Marrakesh Ratification Campaign, Immediate Past President, WBU