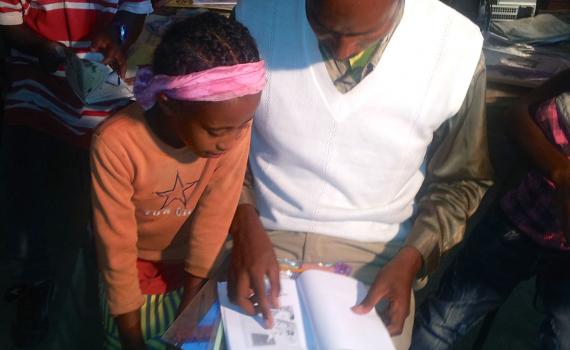 In 2010, research conducted by USAID into children’s reading performance at primary schools in Ethiopia found that a third of children in second grade and a significant number of third-graders could not read at all. The findings led to urgent nation-wide efforts to address child literacy, including establishment of kindergartens and pre-school literacy programmes at kindergartens. However, kindergartens still absorb less than 14% of Ethiopia’s 7.5 million pre-school children (Ministry of Education, 2012). In addition, Ethiopia lacks mother-tongue reading materials for young children.

CODE-Ethiopia increased availability of reading materials for pre-school children by creating new story and picture books in print and electronic formats in Amharic, which is Ethiopia’s official language, and Afaan Oromoo, the mother tongue of over 30 million Ethiopians.

The pilot project succeeded in improving children’s early literacy skills in the three communities: assessments conducted by CODE-Ethiopia found that print awareness of children who took part in the project increased from 54% to 78%. Print awareness is a child’s earliest understanding that written language carries meaning, and children who have good print awareness are more likely to succeed in learning to read.

Based on the success of the pilot project, CODE-Ethiopia has built skills of community librarians at 22 more libraries from across the country to offer family literacy sessions, and is discussing further scale-up of the project.

ABOUT CODE-ETHIOPIA AND THE THREE COMMUNITY LIBRARIES

CODE-Ethiopia is a non-governmental organization that works through a network of 97 community libraries to promote literacy in Ethiopia. The three libraries that took part in the pilot project serve farming communities in densely populated rural areas. Each library attracts an average of 85 people a day. The libraries provide access to print resources; support students who are conducting research and doing homework, and promote literacy.

Reading e-books made our learning fun and easy. It was almost as if I had the librarian right next to me, helping me learn. Because of the books I was no longer falling behind in my studies and was finally able to pass my exams.
Bethlehem, participant from Fiche Community Library
Public Library Innovation Programme
Ethiopia