Home > EIFL in Action > Solar power and ICT connects farmers in four regions of Uganda
NEXT PROJECT
Submitted by Edvaldas_B on Sat, 2017-10-07 15:46 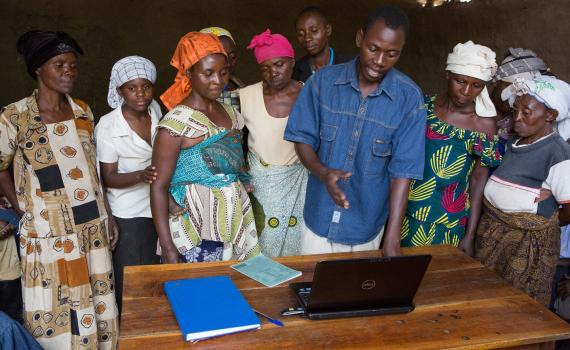 A farmers’ group leader discusses information found on the internet with women farmers at Bwera Information Centre, one of the five community libraries taking part in the Connect Uganda Project.

Most Ugandans (87%, according to the World Bank) live in rural areas and are involved in farming. Without access to information about modern farming methods, they struggle to make a living. Uganda’s 140 public and community libraries serve as critical information access points for communities. But many of these known and trusted information service providers do not have electricity, computers or internet connections.

With support from the EIFL Public Library Innovation Programme (EIFL-PLIP) in 2012, the non-governmental organization Maendeleo Foundation installed wi-fi internet connections and netbook computers in five rural libraries (three netbooks per library). The libraries are all members of the Uganda Community Libraries Association (UgLA), Maendeleo Foundation’s main partner in the Connect Uganda Project. At three libraries where there was no electricity, the foundation installed solar panels to charge the netbooks.

In less than a year, the five libraries trained 700 farmers and other community members, and 10 librarians to use computers and the internet. They supported information searches of 570 farmers and trained 10 farmer volunteers (two at each library) to share translated and re-packaged information at farmers’ group meetings, thus also serving the needs of non-literate farmers.

The project demonstrated to the rural communities the value of information and communication technology (ICT). As a result, farmers' groups and library users were inspired to contribute to the cost of internet connections. The project helped farmers petition a government agricultural agency to supply them with disease-resistant coffee plants, and to identify new species of trees to grow and sell. Access to ICT and connection to the outside world encouraged young people to take up farming as a career.

Read a BBC story about Maendeleo Foundation, featuring their work in schools and the Connect Uganda project.

Read a two-page case study about the Connect Uganda project.

Through the internet, I discovered new nutritious plant species that I can plant alongside my bananas. Now I have started a nursery bed with 600 seedlings of Luceana, which I am selling to fellow farmers.
John Baluku, farmer in Western Region
Public Library Innovation Programme
Uganda