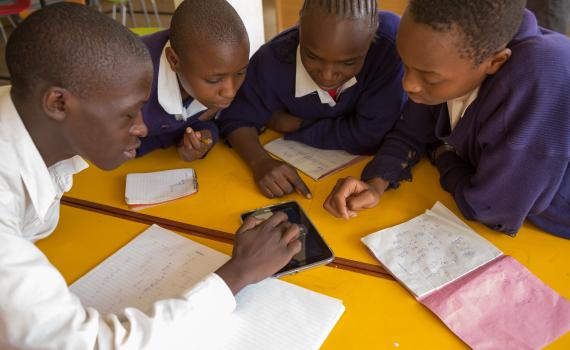 Kibera is a slum that is home to over a million people on the outskirts of Nairobi, Kenya’s capital city. Schools are critically under-resourced and children must learn in classrooms that do not have electricity, computers or internet access. Poor education means that children struggle to pass exams; lack of access to technology further disadvantages them in a job-market that increasingly demands computer skills.

With a grant to cover equipment and some operational costs from the EIFL Public Library Innovation Programme (EIFL-PLIP) in 2013, the library bought seven tablet computers and a wireless internet router, and began designing a computer skills and education project to help children with their school subjects.

The library partnered with the Kenyan educational agency eLimu, which creates digital content for schools in fun formats like animations, video and quizzes. eLimu pre-loaded the tablet computers with educational material, and taught the librarians how to integrate the tablets and the content into a learning programme. They also taught librarians how to pass on these skills to children.

To market the project, librarians contacted headmasters and teachers, and asked young library users to distribute fliers. The response was overwhelming: in less than a year (2012/2013) the library taught 120 students to use the tablets, research the internet and access the educational material - more than double the number originally intended.

After a year, the library surveyed students who took part in the training programme. Over half of the students interviewed said the programme had helped improve their school results in English, mathematics and science.

The project won recognition, generating new resources for expansion: in 2014, Kenya National Library Service received a grant from an international non-governmental organization to replicate the project in three more libraries.

This was the chance of a lifetime. We learnt how to Google, to do research, take photos and we could get access to all school subjects. We learnt through solving puzzles and doing tests, like test-yourself mathematics. The programme helped me improve my academic progress.
Albert, Class 8, Anajali school, Kibera
Public Library Innovation Programme
Kenya