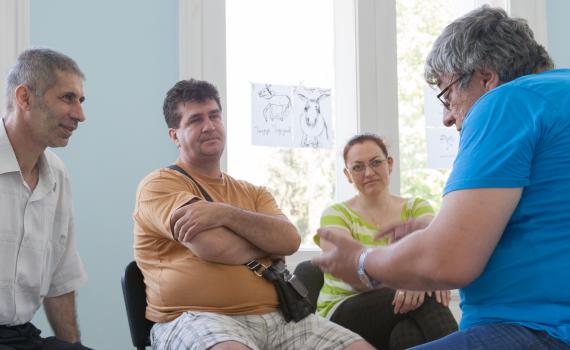 Successful library trainee, Anatolij Parishkov passes on his job-seeking skills to other trainees in Lyuben Karavelov Public Library. Anatolij was able to re-open his small business after learning to use ICT in the library.

Long-term unemployed people are an at-risk group who struggle with depression and feelings of failure and exclusion. When lack of skills is an additional barrier to employment, these feelings get worse.

In 2010, the Labour Office Directorate in Ruse, Bulgaria’s fifth largest city, estimated that unemployment had risen to 10%, and that of this number, a third were aged over 40. At the same time, Lyuben Karavelov Regional Library in Ruse recorded a 70% increase in the number of people coming to use the library’s computers - mostly to look for jobs.

Librarians observed that older users lacked computer skills. A survey of unemployed library members aged from 18 to 40 found that most believed lack of computer skills and money for training were the main obstacles to finding jobs.

With support from the EIFL Public Library Innovation Programme (EIFL-PLIP) in 2011, the library created the KNOW service - Knowledge for Opportunities for Work. The service supports long-term unemployed people aged over 40 by providing free internet access and computer training, job-seeking skills, motivation, confidence-building and access to counsellors.

Intensive marketing attracted over 250 mentions in local and national media - and unemployed people flocked to the library to seek help.

Read a two-page case study about the library's Knowledge for Opportunities for Work project.

This training was the reason why I was chosen for a job! Now I am happy. I love my job and my new colleagues. I’m grateful to the library staff!
Mariana Alexandrova, successful jobseeker
Public Library Innovation Programme
Bulgaria