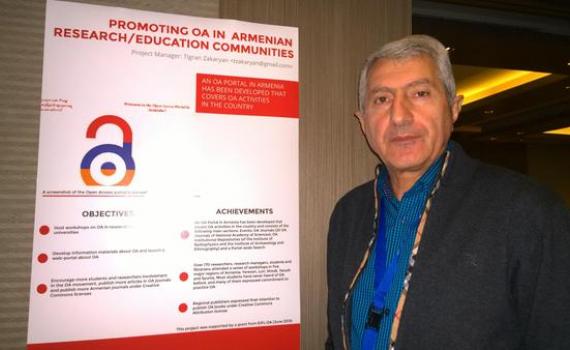 Support for and awareness about open access (OA) has been growing steadily in Armenia.

In 2008 a workshop attended by academics, researchers and librarians from across the country led to development of a national OA strategy for Armenia, and publication of more OA journals. The workshop was organized by EIFL, the Fundamental Scientific Library of the National Academy of Sciences of the Republic of Armenia, and EIFL's partner consortium, Electronic Library Consortium of Armenia (ELCA).

In 2010, as awareness about OA spread, 20 major scholarly journals were converted into open access. The journals date back to 1940, and include over 2,000 issues with more than 32,000 articles.

In 2011 the Institute of Radiophysics at the National academy of Sciences launched Armenia's first OA institutional repository. The repository includes preprints of research articles, theses, dissertations and conference proceedings.

Although there was support for OA at the National Academy of Sciences, Armenia's university community, especially outside the capital city, Yerevan, lagged behind. By 2014 there were over 88,000 scientific research articles available in OA in Armenia, but theses and dissertations were not available online.  About 600 dissertations are defended annually in Armenia.

To address these issues, ELCA implemented two EIFL-funded projects: 'Promoting open access in the Armenian research and education communities', and 'Enabling OA ETDs as High Priority Scholarly Resources for Armenian Research and Education Communities'. The two projects engaged members of the academic community from all over Armenia, including researchers and students from a wide range of universities and research institutes, journal editors and publishers, and librarians, in OA activities.