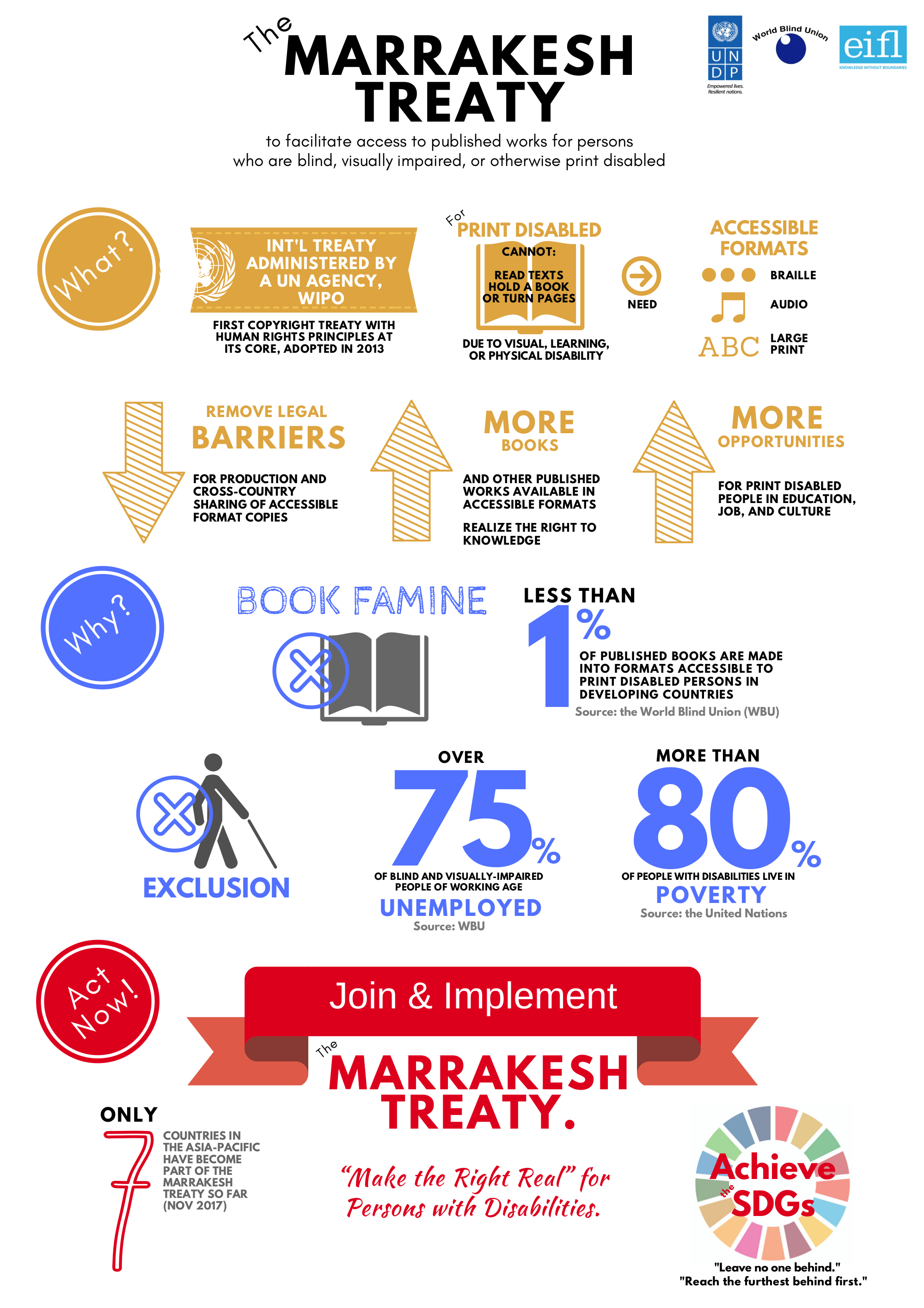 To mark the International Day of Persons with Disabilities on 3 December, three global organizations, the United Nations Development Programme (UNDP), the World Blind Union-Asia Pacific (WBUAP) and EIFL developed an Issue Brief for the Asia-Pacific region to raise awareness about the Marrakesh Treaty for people with print disabilities , and to call on governments in the region to join the Treaty.

The Issue Brief provides a summary of the Treaty and describes the key benefits that ratification of the Treaty will have for blind, visually impaired and otherprint-disabled people. The partners have also released an infographic to raise support the call.

The goal of the Marrakesh Treaty is to help end the book famine, the fact that only about 7% of published works are made available globally in accessible formats, such as Braille, audio and large print, and digital formats. This problem is partly due to barriers created by copyright law, barriers that the Treaty seeks to remove.

The Asia-Pacific region is estimated to have the world’s largest number of persons with blindness (21.4 million) and moderate to severe visual impairment (135 million). A rapidly ageing population and the rise of diseases such as diabetes in the region will further increase the number of print disabled persons.

“Expanding the ratification and implementation of the Marrakesh Treaty to more countries in the region is of critical importance to ensure realization of the fundamental right to information and knowledge and to realize a more inclusive world for all.”

So far only a handful of countries in the Asia-Pacific region have ratified or acceded to the Marrakesh Treaty. These are Australia, Democratic People’s Republic of Korea, India, Mongolia, Republic of Korea, Singapore and Sri Lanka (as of November 2017).

THE ROLE OF LIBRARIES

Libraries are key to the success of the Marrakesh Treaty for two main reasons. Throughout the world, libraries have a long history serving people with print disabilities. Under the Treaty, blind people’s organizations, libraries and other so-called ‘authorized entities’ can send accessible format copies to other countries.

"Throughout the world, libraries are one of the primary sources of reading materials in accessible formats,” said Rima Kupryte, EIFL Director. “EIFL is strongly committed to speedy ratification of the Marrakesh Treaty that creates new opportunities for libraries to vastly improve services to people with print disabilities, thereby improving lives and increasing life-chances.”

Read the media release about the Marrakesh Treaty Issue Brief.

Read more about EIFL’s support for ratification of the Marrakesh Treaty and its implementation into national law.