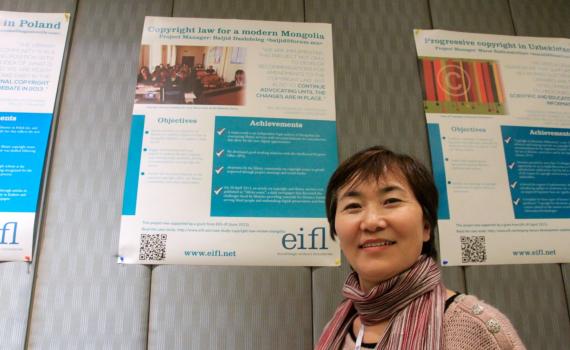 [Update: Mongolia became the 10th country to ratify the Marrakesh Treaty when the Government of Mongolia deposited its instrument of ratification at the World Intellectual Property Organization (WIPO) in Geneva on 23 September 2015].

EIFL is delighted that Mongolia is currently in line to become the tenth country to ratify the Marrakesh Treaty for persons who are blind, visually impaired or otherwise print disabled. On 9 July 2015, the State Great Hural (Parliament) of Mongolia voted by an 86% majority to support ratification.

“I am so proud that Mongolia supports the adoption of an international legal standard to ensure that blind people have the right to read, a basic human right that librarians know is so important for education, employment and personal development,” said Baljid Dashdeleg, EIFL Copyright Coordinator, Mongolian Libraries Consortium.

“In 2014, we decided to advocate for early adoption of the Marrakesh Treaty by Mongolia,” continued Baljid.

“Over the past year, we raised awareness of the benefits of the treaty, contributed documents and initiated discussions together with our partners, the Mongolian National Federation of the Blind, the Daisy Centre at Ulaanbaatar Public Library and the Ministry of Culture, Sport and Tourism, in cooperation with the Intellectual Property Office.

“I’m delighted that our hard work has paid off. We are very grateful to EIFL for their support, without which this work would not have been possible,” she said.

EIFL provided a grant of $2,500 to the Mongolian Libraries Consortium to support ratification of the Marrakesh Treaty in Mongolia. The project began in June 2014 for a duration of six months.

EIFL supported the World Blind Union in negotiations over five years at the World Intellectual Property Organization (WIPO), and participated in the Diplomatic Conference that led to the adoption in 2013 of the Marrakesh Treaty.

To complete the work at WIPO, and to fulfill the promise of the right to read for people with print disabilities, EIFL supports ratification of the treaty in partner countries, and its implementation into national copyright law. The Treaty enters into force when it is ratified by 20 countries. So far, the Marrakesh Treaty has been ratified by India, El Salvador, United Arab Emirates, Uruguay, Mali, Paraguay, Singapore, Argentina and Mexico. When Mongolia deposits its instrument of ratification with WIPO, it is in line to become the tenth country to ratify the treaty.

“Ratification by Mongolia will be another significant step forward in the Treaty’s global entry into force, when it becomes binding on its members. It paves the way for a brighter future for people with print disabilities everywhere. We commend the government of Mongolia for their leadership, and thank the Mongolian team for their dedication and commitment,” said Teresa Hackett, EIFL Copyright and Libraries Programme Manager.

Read more about how EIFL is supporting ratification of the Marrakesh Treaty in partner countries, and its implementation into national copyright law.

The Marrakesh Treaty: an EIFL Guide for Libraries.