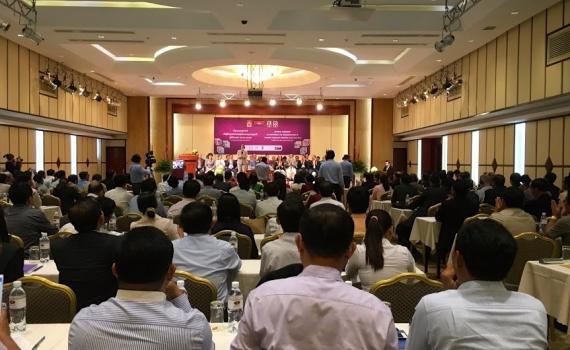 National Workshop on Monitoring Implementation of the National Disability Strategy Plans 2014-2018 in Cambodia, where the Marrakesh Treaty briefing was presented.
Posted: August 31, 2017

Over 230 government officials, representatives of disabled people’s organizations and national and international non-governmental agencies in Cambodia have received a briefing on the Marrakesh Treaty for blind, visually impaired and otherwise print disabled people.

The briefing - the first presentation of the Marrakesh Treaty at a national meeting of key stakeholders in Cambodia - aimed to raise awareness about the Treaty, to set the stage for further discussion, and to encourage ratification. It took place during a plenary session of the National Workshop on Monitoring Implementation of the National Disability Strategy Plans 2014 -2018, held on 23 - 24 August 2017 in Phnom Penh, Cambodia’s capital city.

An (kh.undp.org/content/cambodia/en/home/library/foster-voice---participation.html) Issue Brief, prepared by the United Nations Development Programme (UNDP) in partnership with EIFL, the World Blind Union and the Association of the Blind in Cambodia, was distributed to stakeholders in English and Khmer, and in braille and audio formats.

The Marrakesh Treaty entered into force in September 2016, for the countries that have ratified it. The Treaty creates an international legal framework that makes it possible for organizations like libraries to make accessible format copies (for example, in braille, large print and audio) of books and other printed works, and to share these copies across national borders.

Ratification of the Marrakesh Treaty would have enormous benefits for Cambodia’s over 100,000 blind and visually impaired people, who are often excluded from educational opportunities because of a lack of learning materials in accessible formats. Lack of education can lead to unemployment, poverty, and political and cultural exclusion, creating significant barriers for Cambodia to achieve the United Nations Sustainable Development Goals (SDGs).

According to the Issue Brief, ratification of the Treaty will provide Cambodia with an additional legal framework to advocate for and to protect and promote the rights of persons with disabilities. It will create opportunities for organizations and institutions from different sectors of society to respond to the needs of people living with a print disability.

Ratification would require certain changes in Cambodia’s copyright law. For example, in order to comply with the requirements of the Treaty, the law would need to include a provision to permit the creation of accessible format copies. The scope of certain provisions of the existing law would also need to be broadened to allow import and export of accessible format copies produced for the exclusive use of print-disabled persons.

Cambodia was one of only two of the 10-member ASEAN (Association of Southeast Asian Nations) countries to sign the Treaty when it opened for signature on 28 June 2013 in Marrakesh. Indonesia was the other. So far, one other ASEAN country has ratified the Treaty - Singapore.

Libraries are key to the success of the Marrakesh Treaty because they are major providers of reading materials in accessible formats. Under the Treaty, blind people's organizations, libraries and other ‘authorized entities’ can distribute accessible format copies across borders. For these reasons, EIFL has been a strong advocate for ratification of the Marrakesh Treaty and its implementation into national copyright law.

Read more about EIFL’s support for ratification of the Marrakesh Treaty and its implementation into national law.

Download the brief in English or Khmer in EIFL Resources.

The EIFL Copyright and Libraries Programme will be supporting our partner, Cambodia-Electronic Information for Libraries Consortium (CAM-EIFL), to advocate for ratification of the Treaty in Cambodia and for any legal changes needed for implementation.