Skip to main content
Thailand: Marrakesh is good to go!
Thailand’s accession to the Marrakesh Treaty, plus recent amendments to the copyright act mean that people in Thailand with disabilities can start to benefit almost immediately 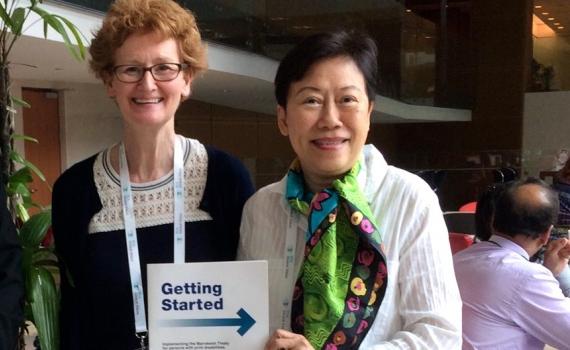 Soeythip Sukul, EIFL Coordinator in Thailand, with EIFL Copyright and Libraries Programme Manager Teresa Hackett at the launch of 'Getting Started’, a practical guide to the Marrakesh Treaty, at the IFLA 2018 congress in Kuala Lumpur.
Posted: January 28, 2019

On 28 January 2019, the Kingdom of Thailand deposited its instrument of accession at the World Intellectual Property Organization (WIPO) to join the Marrakesh Treaty for persons with print disabilities. Since amendments bringing the Thai Copyright Act into line with the treaty were adopted on 11 November 2018 (Copyright Act (No. 4) B.E. 2561 (2018)), people with disabilities can start benefiting from 28 April 2019, the day the treaty enters into force in Thailand.

In December 2018, EIFL and IFLA (the International Federation of Library Associations and Institutions) wrote a letter to congratulate Prime Minister of Thailand Prayut Chan-o-cha for Thailand’s positive and disability-friendly approach in its national implementation of the treaty, that can serve as a good model for the region. The copyright law amendments uphold the rights of persons with disabilities to equal access to printed works, and offer exciting new possibilities for libraries to develop their services to readers.

“I am delighted that Thailand has joined the Marrakesh Treaty,” said Soeythip Sukul, EIFL’s Coordinator in Thailand. “On 12th February, I will train librarians and blind users at Thammasat University in Bangkok to use Bookshare, an online library of accessible books, licensed through EIFL. When the US joins the treaty, many more Bookshare titles will be available to readers in Thailand, and there will be new opportunities to obtain books from other Marrakesh countries.’’

Thailand becomes the 77th country to join the Marrakesh Treaty. In EIFL’s network, it is the 17th country to join, and a frontrunner in completing both of the legal steps (ratification and implementation) needed in most countries for people to start using the treaty .

EIFL welcomes Thailand to the expanding community of countries that have chosen to prioritize the social and human rights of people with disabilities.

In the coming weeks, the Ministry of Commerce is expected to issue notifications setting out the fine (but important) details concerning authorized entities (such as libraries), accessible formats, and rules around converting and communicating the copyrighted material. EIFL and IFLA have offered to support local experts to produce a Thai version of our practical guide to start using the treaty, 'Getting Started. Implementing the Marrakesh Treaty for persons with print disabilities. A practical guide for librarians'.